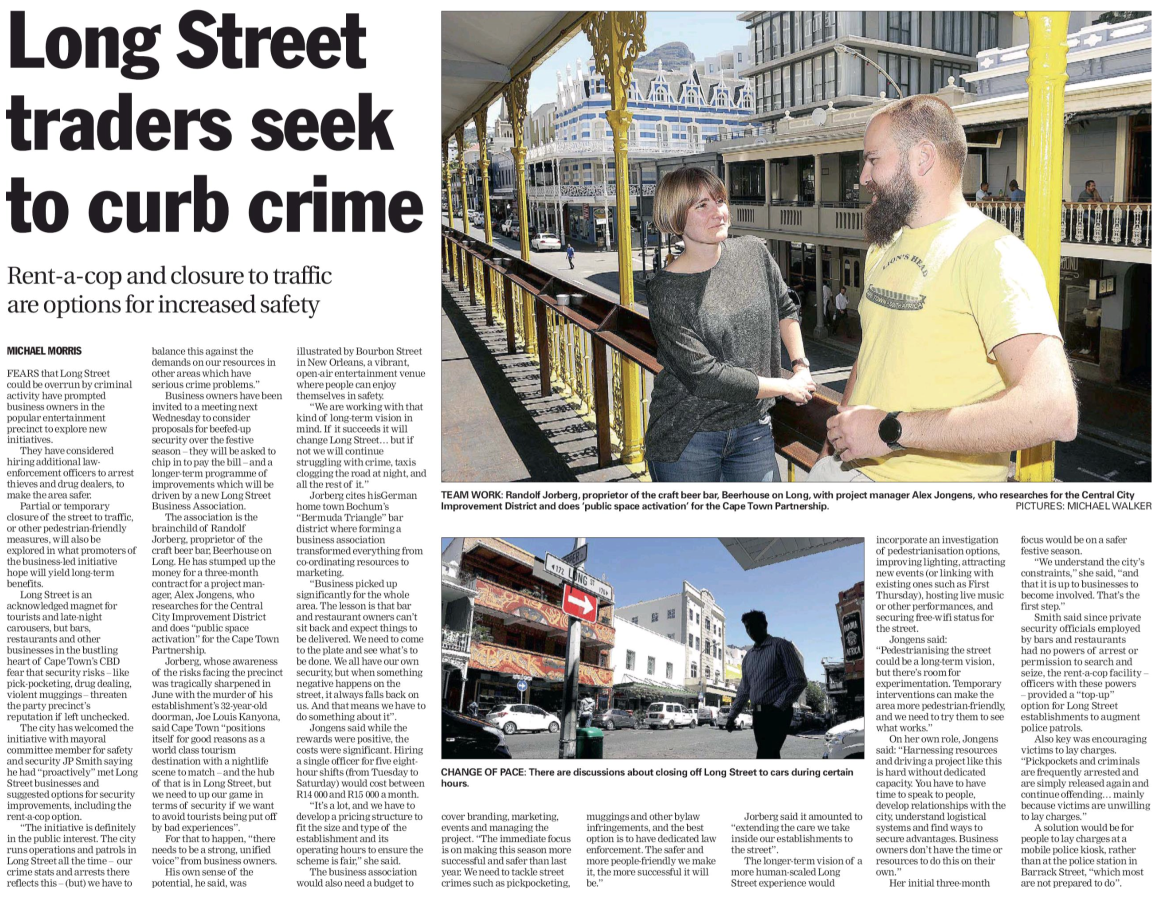 FEARS that Long Street could be overrun by criminal activity have prompted business owners in the popular entertainment precinct to explore new initiatives.
They have considered hiring additional law enforcement officers to arrest thieves and drug dealers, to make the area safer. Partial or temporary closure of the street to traffic, or other pedestrian-friendly measures, will also be explored in what promoters of the business-led initiative hope will yield long-term benefits. Long Street is an acknowledged magnet for tourists and late-night carousers, but bars, restaurants and other businesses in the bustling heart of Cape Town’s CBD fear that security risks – like pick-pocketing, drug dealing, violent muggings – threaten the party precinct’s reputation if left unchecked.
The city has welcomed the initiative with mayoral committee member for safety and security JP Smith saying he had “proactively” met Long Street businesses and suggested options for security improvements, including the rent-a- cop option. “The initiative is definitely in the public interest. The city runs operations and patrols in Long Street all the time – our crime stats and arrests there reflects this – (but) we have to balance this against the demands on our resources in other areas which have serious crime problems.” Business owners have been invited to a meeting next Wednesday to consider proposals for beefed-up security over the festive season – they will be asked to chip in to pay the bill – and a longer-term programme of improvements which will be driven by a new Long Street Business Association.
The association is the brainchild of Randolf Jorberg, proprietor of the craft beer bar, Beerhouse on Long. He has stumped up the money for a three-month contract for a project manager, Alex Jongens, who researches for the Central City Improvement District and does “public space activation” for the Cape Town Partnership. Jorberg, whose awareness of the risks facing the precinct was tragically sharpened in June with the murder of his establishment’s 32-year-old doorman, Joe Louis Kanyona, said Cape Town “positions itself for good reasons as a world class tourism destination with a nightlife scene to match – and the hub of that is in Long Street, but we need to up our game in terms of security if we want to avoid tourists being put off by bad experiences”.
For that to happen, “there needs to be a strong, unified voice” from business owners. His own sense of the potential, he said, was illustrated by Bourbon Street in New Orleans, a vibrant, open-air entertainment venue where people can enjoy themselves in safety.
“We are working with that kind of long-term vision in mind. If it succeeds it will change Long Street… but if not we will continue struggling with crime, taxis clogging the road at night, and all the rest of it.” Jorberg cites his German home town Bochum’s “Bermuda Triangle” bar district where forming a business association transformed everything from co-ordinating resources to marketing. “Business picked up significantly for the whole area. The lesson is that bar and restaurant owners can’t sit back and expect things to be delivered. We need to come to the plate and see what’s to be done. We all have our own security, but when something negative happens on the street, it always falls back on us. And that means we have to do something about it”. Jongens said while the rewards were positive, the costs were significant. Hiring a single officer for five eight hour shifts (from Tuesday to Saturday) would cost between R14 000 and R15 000 a month. “It’s a lot, and we have to develop a pricing structure to fit the size and type of the establishment and its operating hours to ensure the scheme is fair,” she said. The business association would also need a budget to cover branding, marketing, events and managing the project. “The immediate focus is on making this season more successful and safer than last year. We need to tackle street crimes such as pickpocketing, muggings and other bylaw infringements, and the best option is to have dedicated law enforcement. The safer and more people-friendly we make it, the more successful it will be.” Jorberg said it amounted to “extending the care we take inside our establishments to the street”.
The longer-term vision of a more human-scaled Long Street experience would incorporate an investigation of pedestrianisation options, improving lighting, attracting new events (or linking with existing ones such as First Thursday), hosting live music or other performances, and securing free-wifi status for the street.
Jongens said: “Pedestrianising the street could be a long-term vision, but there’s room for experimentation. Temporary interventions can make the area more pedestrian-friendly, and we need to try them to see what works.” On her own role, Jongens said: “Harnessing resources and driving a project like this is hard without dedicated capacity. You have to have time to speak to people, develop relationships with the city, understand logistical systems and find ways to secure advantages. Business owners don’t have the time or resources to do this on their own.” Her initial three-month focus would be on a safer festive season. “We understand the city’s constraints,” she said, “and that it is up to businesses to become involved. That’s the first step.”
Smith said since private security officials employed by bars and restaurants had no powers of arrest or permission to search and seize, the rent-a-cop facility – officers with these powers – provided a “top-up” option for Long Street establishments to augment police patrols.
Also key was encouraging victims to lay charges. “Pickpockets and criminals are frequently arrested and are simply released again and continue offending… mainly because victims are unwilling to lay charges.”
A solution would be for people to lay charges at a mobile police kiosk, rather than at the police station in Barrack Street, “which most are not prepared to do”.